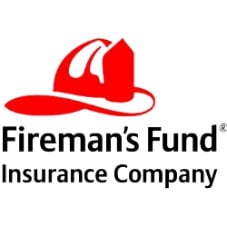 The company is managed by CEO Arthur Moossman and has been around since 1863. The company also and a number of subsidiaries including the Fireman's Fund McGee, Marine, Underwriters & more. However, there have been some major changes with the company lately including the closing of Fireman's and a transition to Allianz Insurance. This eliminates most of the vestiges of the old company.

Let's take a closer look at Fireman's Fund Insurance Company reviews and find out how they rate - now that they are part of Allianz.

Following are some of the answers to commonly asked Firemans Fund small business insurance questions:

What Types Of Commercial Insurance Does Firemans Fund Offer?

How Much Does Firemans Fund's Small Business Insurance Cost?

The average cost of Firemans Fund's commercial insurance policies ranges from $89 to over $179 per month, and is mainly based on your business's: Industry, Location, Gross Sales, Employees and/or Payroll, Policy Limits, Endorsements, Deductibles, Experience & Claims History.

The history of the company dates back to its founding in 1863 in San Francisco, California. The name that they chose was Fireman's because not only do they provide insurance to firefighters, but they also donated 10% of their profits to the widows and orphans of firefighters that had fallen in the line of duty.

The company provided millions of dollars throughout the years through their heritage program to these beneficiaries, providing equipment, training and educational programs to fire department as well as benefits for the spouses and children of fallen firefighters. They were able to help firefighters and fire departments all across the United States.

Fireman's Fund didn't just work with firefighters however; they ventured into helping to create some of the most well-known landmarks in US history. At certain points in history, they were the insurance company behind the Golden Gate Bridge and behind the Spirit of St. Louis.

They were also well known for being the largest insurer in the Hollywood film industry they have been insuring motion pictures since the silent film era, and have since expanded to reality shows, concerts, special events and much more. They paid out $15 million in benefits after well-known actor John Candy died during the filming of Wagon's East in 1994.

The transition to Allianz started with the announcement of the event in September 2014. It was announced that Allianz Global Corporate and Specialty Insurance, which mostly went by the acronym AGCS, would absorb Fireman's Fund Commercial Property and Casualty Insurance, a move that would soon involve the entire company. This absorption started on January 1 of 2015.

Allianz was able to acquire Fireman's Fund Insurance Company for a total of $365 million with the deal closing in the middle of 2015. This effectively spelled the end of Fireman's, although their insurance products and services continue to be offered at the same rates and at the same levels of customer service - just under the Allianz banner.

According to the Allianz website, "Fireman's Fund Insurance Company (FFIC) is now integrated into Allianz Global Corporate & Specialty (AGCS). This consolidation means that current Fireman's Fund policyholders and their brokers will benefit from the same focused insurance offerings, but with the added bonus of Allianz's global reach and infrastructure.

The majority of the insurance offered by Allianz is commercial, and the scope has expanded quite a bit from the initial types of insurance at the company had when they first began. The company also offers a number of services including the Allianz Center for Technology and Allianz Multinational as well as captive insurance, crisis management and risk consulting.

Fireman's fund specialized in the following types of business insurance:

And the following industries:

There are lots of ways that you can connect with Allianz and sign up for insurance. They are available in more than 70 countries and are able to work with clients in more than 200 countries. There are many offices throughout the United States and Canada as you might imagine, but there are also offices in many of the smaller countries out there that you may not expect.

Allianz has a streamlined process to deal with claims and MBA to commit to their customers to handle them as quickly and as efficiently as possible. They are able to handle claims management quickly even across the globe and they know how important it is for businesses to recover when something happens. Fireman's Fund Insurance Company reviews are very good.