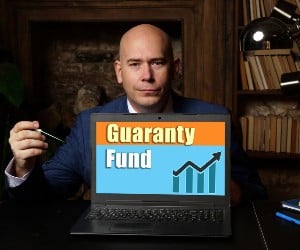 Insurance Guaranty Funds Terms Glossary. Guaranty Funds are money pools authorized by state (usually insurance) regulators. They are created and maintained via monetary assessments from certain insurers that operate within that given state.

The funds are used to reimburse policyholders and claimants of an insolvent insurer in that state.

Each state has a guaranty fund with a similar mission, which is to minimize the losses to their citizen policyholders that are caused by an insurance company’s inability to fulfill its obligation to provide ongoing insurance protection and/or to pay due claims.

These groups are seen as the most vulnerable to insurance carrier instability, whereas large commercial insureds are perceived to be more capable of handling insurance-related crises without state government assistance.

However, typically by default, guaranty fund payments are often made to address losses suffered by larger, commercial insureds.

The Insurance Guaranty Funds Terms Glossary should help you with some of the jargon and legal ease used in the insurance industry.

assessment - With regards to guaranty funds, refers to a state's insurance regulators collecting funds from the various, authorized insurers in its state, in order to handle the financial responsibilities of a failed insurer. The assessments are usually proportional to each insurance company's market share in the lines of business that qualify for assessment.

assessments authorized - The total, quarterly level of assessments that is permitted by a given quaranty association's board of directors. This amount applies to a given year.

assessment capacity - The total amount that a guaranty association can possibly assess within a given operating year.

asset/liability management - In the realm of guaranty funds, the term indicates an insurer's concern with properly handling its various assets in a manner that will allow it to respond to its contractual insurance duties, particularly claims payments and related expenses.

Authorized Control Level - A financial benchmark consisting of a determination of the minimal amount of operating capital an insurer must have in order to maintain operations at its current level of operating risk.

claim cap - Determined by statute, it is the maximum loss payment that may be made by a given guaranty association.

conservatorship - Similar to rehabilitation and refers to state insurance authorities providing strong guidance to a troubled insurer on how to handle its operations. The level of control, though supervisory, is still according to the insurer accepting advice.

covered claim - A loss that, due to meeting a given state's guaranty fund definition, qualifies for payment under that fund.

early access - Funds that a liquidator may release from an insolvent insurer to a guaranty association for paying claims. However, such funds may be called back if payments have to be made to parties that have a higher preference.

estate - An insolvent company's remaining liquid and non-liquid assets that will be used to satisfy claims.

F.A.S.T. - Acronym for Financial Analysis and Surveillance Tracking. It is a financial audit system used by the NAIC to evaluate insurer solvency.

final order of liquidation - Where a state insurance regulator makes a formal determination, via use of the courts, that an insurer is no longer financially viable. Besides it being a formal method to trigger guaranty fund action, it also authorizes an applicable insurer's assets to be sold in order to assist with fulfilling financial obligations to claimants.

finding of insolvency - Where a state insurance regulator determines, informally, that an insurer is no longer financially viable. It is used by certain states as the method to trigger action by their guaranty fund.

guaranty fund trigger - Refers to the official event that creates an obligation for the fund to provide payments to policyholders or claimants. Typically, the trigger is either evidence of a particular insurer's insolvency or a formal pronouncement regarding a failed insurer.

insolvency data - The types of information that are included in an applicable state's insurer insolvency records. it includes companies placed in liquidation or receivership and, often, includes information on termination of an insolvent insurer's “near-insurance” operations, such as warranty business.

IRIS Ratios - Stands for Insurance Regulatory Information System and it is a set of tests that allow state regulators to evaluate insurer financial statement data. Comparing individual ratio results to benchmarks provides an indication of a given insurer's financial health.

liquidation basis - The phase where an insurer terminates handling of any new business and, using conservative valuation, assets are sold in order to satisfy that insolvent insurer's financial liabilities.

liquidator - The person responsible for supervising the process of winding down the operations of an insolvent insurer. Duties include reviewing claims made against the liquidating insurer and determining how to distribute estate assets to claimants.

member refunds - Amounts that are either credited to or returned to member companies of assessments previously levied and paid.

N.A.I.C - National Association of Insurance Commissioners. This is a cooperative body consisting of representatives from each state's insurance regulatory authority. It promotes uniform standards to assist insurance regulators in their efforts to oversee their applicable insurance market.

net assessment - The total amount assessed, less any credits and refunds made to a given association member.

net expense - A Guaranty Association's total payments minus the total recoveries it makes.

net worth provision - Any state law that allows a guaranty fund to ignore claims presented by insureds with high net worth. The simple rationale is that wealthier persons have the wherewithal to handle their own losses. It preserves funds in order to help those who are more dependent on insurance.

order of liquidation - Refers to a court legally declaring that an insurer is insolvent and that it has to sell its assets in order to satisfy claims against it.

order of rehabilitation - Refers to a court appointing a state insurance commissioner to take control over a financially impaired insurer. The commissioner's task is to return the insurer to financial health and the commissioner is given full managerial control of workforce and assets.

order of supervision - Refers to a state insurance commissioner restricting the transactions of a financially impaired insurer until it implements the corrective action stipulated by the commissioner.

order of suspension - Refers to a state insurance commissioner ‘s partially or fully prohibiting an insurer from performing transactions in its jurisdiction.

premium risk - A measurement of how inaccurate a given insurer's pricing matches its total claims costs.

Proof of Claim (POC) - A formal, filed request made to an insolvent insurer seeking funds (either for a loss or a financial debt).

receiver - Merely another name for key parties of an impaired insurer's liquidation or rehabilitation. Specifically, a liquidator, rehabilitator, supervisor or conservator.

receivership - Refers to an insurer that is placed under a financial reorganization that is supervised by a court-appointed trustee (typically a state's insurance commissioner or a commissioner appointee).

recoveries - Refers to any payments that an insolvent insurer makes to a guaranty association. Payments usually consist of liquidating a company's assets.

rehabilitation - This is a step up from a conservatorship and refers to state insurance authorities actually directing a troubled insurer on how to handle its operations. The level of control is complete and, typically, when rehab fails, a finding of liquidation or insolvency is close behind.

risk-based capital standards - A set of financial standards promoted by the NAIC to assist in monitoring insurer solvency. The focus is upon evaluating financial capacity in relationship to the level of risk an insurer assumes via the lines of business it writes and the type of markets it serves.

runoff - Any operations that are controlled in a manner to transfer or terminate future business. Regarding insurer insolvency, the strategy refers to non-renewing or transferring policies to other insurers in order to end operations in a more orderly manner as opposed to placing the business in liquidation.

scope - refers to the lines of business that are eligible for protection under a given state's guaranty fund program.

solvency regulation - Generic reference to array of acts and procedures used by insurance authorities in their attempts to maintain viability for the insurers that operate within their state.

statutory solvency margin - The minimum level of solvency an insurer is required to achieve as calculated by a given solvency test.

traditional insolvency monitoring - Refers to a regular method of assessing insurance company financial health based on keeping track of financial ratios that use minimum financial information which may not accurately reflect operating conditions.

Uniform Data Standards (UDS) - A set of requirements that control the circumstances of electronic communication (of policy and claim information) between an impaired insurer's receiver and a guaranty funds.

valuation basis - With regard to guaranty funds, refers to the values at which an insurer's balance sheet information appears (such as book or market value). The concern is that the figures most accurately reflect worth so that financial evaluations are also accurate.

To find out what types of coverage your business needs, speak to a professional insurance broker with experience in insuring businesses like yours.

Learn about insurance terms and definitions for specific insurance realted areas with the Insurance Glossaries below: